So far, the grand total of identified species on the property stands at 879.

We haven't really had much of a winter here yet. There's been a hard frost or two, and the winds have certainly been howling, but we've had no snow, and it hasn't gotten below freezing for long (though rumour has it that our relatively balmy conditions may change in the next day or two). On sunny days, it even feels a bit like spring — though granted, perhaps a rather bitter spring day in early March. The snowdrops are now making a splash, popping up in little clusters all over the lawn. We have two species in the garden: Common Snowdrop (Galanthus nivalis, above) and Greater Snowdrop (Galanthus elwesii, below).  The biggest difference between the two is the shape of their leaves; Greater Snowdrop's are much bigger and broader. These harbingers of spring are well-loved and widely planted in Britain. Long thought to be native to the islands (or perhaps introduced in Roman times), snowdrops are now thought to be much newer arrivals, perhaps as recently as the 1500s.

They're perennial, springing up from their small bulbs in January or February here in Britain. They'll grace our garden for several months, with individual plants (two leaves and a flower) lasting a few weeks each. Once the flowers fade, the leaves die back as well, and all signs of the plant vanish until next winter. In addition to the cheeriness they bring to winter gardens, snowdrops have one more gift for humanity. They contain an active substance called galantamine which has proved useful in the treatment (but not cure) of Alzheimer's disease and other forms of memory impairment.

Email ThisBlogThis!Share to TwitterShare to FacebookShare to Pinterest
Labels: plant 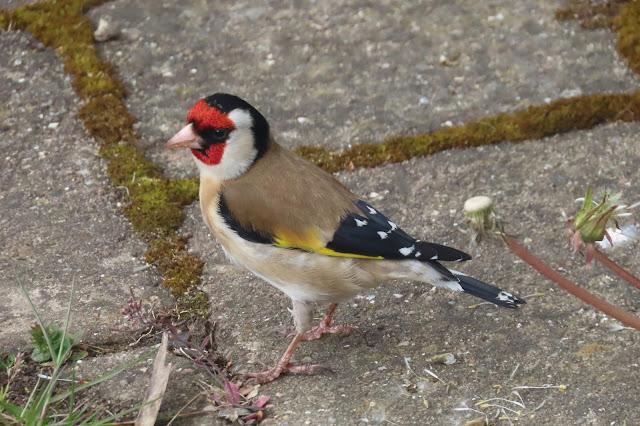 Among the regular visitors to our garden are good numbers of this snazzy species: the European Goldfinch (Carduelis carduelis). They're fond of the seeds of many of the "weeds" dotted around the place (particularly the dandelions), and sometimes gather in big numbers to nibble grit from the driveway. They've built at least one nest that we know of in a shrub near our herb garden, and are occasional visitors to the bird feeders in the winter. According to the RSPB, many of our UK birds head south for the winter, migrating as far as Spain. However, presumably the UK birds are replaced by others from further north during the winter, because we see them year-round.

The black wings with their broad yellow stripe and white spots at the end of the wing and tail feathers are distinctive, as is that noticeably pointed pink bill. Youngsters, which we'll see in late summer, lack that bright red face. European Goldfinches are common and widespread across most of the British Isles (though missing from the highlands of Scotland) and mainland Europe, and have been introduced to Australia, New Zealand, Bolivia, Argentina, a few of the Caribbean islands and parts of the US. The British Trust for Ornithology estimates that there are nearly 1.7 million European Goldfinches across Britain in the summer. Unfortunately, their cheery songs make them popular cage birds. We'd much rather experience them as they are here — free-flying and pouring their lovely songs out into the open air.
Posted by Megan Crewe at 15:12 No comments:

Email ThisBlogThis!Share to TwitterShare to FacebookShare to Pinterest
Labels: bird 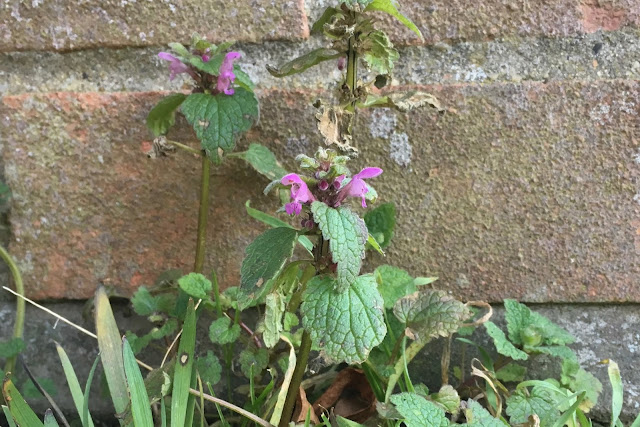 One of the things I love about living in England is the fact that there are flowers blooming all 12 months of the year. Granted, things are pretty thin on the ground at the moment, but with just a little persistence, you can find blooms somewhere. Right now, Red Dead-nettle (Lamium purpureum) is flowering in the garden. It's a common and widespread weed that blooms all year round in mild winters, making it a very important plant for early pollinators. It's called "dead-nettle" because it lacks the sting of the true nettles, which have similarly-shaped leaves.

Red Dead-nettle is a member of the mint family. It's an annual, but it regularly overwinters — and produces copious amounts of seed. It's common in arable fields (which we have in abundance locally) and disturbed areas (roadside verges, railway lines, waste ground, etc.), and we have scores of plants sprinkled across the garden. Its flowers are particularly attractive to long-tongued insects like bumblebees and mason bees, and the caterpillars of several moth species (Angle Shades, Garden Tiger, and White Ermine) feed on its leaves. I haven't seen any bees on them in the past few weeks, but later in the spring, the Red-tailed and Buff-tailed bumblebees will be regular visitors. I can't wait!
Posted by Megan Crewe at 21:26 No comments:

Email ThisBlogThis!Share to TwitterShare to FacebookShare to Pinterest
Labels: plant 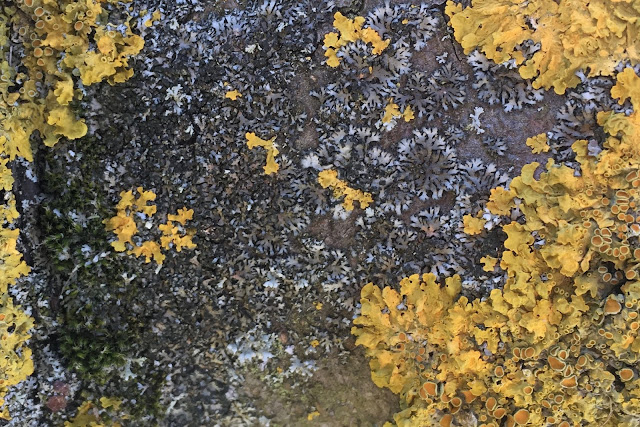 With the garden sinking down into its winter rest, it's time to turn the spotlight back on the lichens that festoon some of the trees. I introduced you to the bright orange Xanthoria parietina last winter. Today, I'm focusing on the somewhat less obvious Phaeophyscia orbicularis — the variably grey species lurking beside the Xanthoria in the picture above. Like its orange neighbour, this is a foliose lichen, which means it's rather leafy in appearance. You can easily lift a corner of the lichen with a fingernail, as much of it isn't firmly attached to the substrate underneath. It can range in colour from from light to dark grey, with multiple colours often visible within the same colony. When wet, it's reported to sometimes go green, but that's not something we've seen yet.

Phaeophyscia orbicularis often forms circular colonies (plenty of examples above) which can grow up to 3 cm (about 1.25 inches) in diameter. However, it can also grow in more diffuse colonies, like the mass on the left side of the picture above. Such colonies are irregular, flatter and pressed more closely to the substrate on which they're growing. The center of the mature colonies tends to be densely covered with lumpy, dark, rounded soralia (the structures that contain little packets of fungal and algal cells that break off to form new colonies). As would be expected in a garden surrounded by well-fertilised farm fields, Phaeophyscia orbicularis tolerates nitrogen-enriched habitats. It's common and widespread across most of Great Britain (somewhat less so in Ireland), growing on bark, twigs, stone and concrete. In our garden, it's particularly common on the bigger branches of the apple trees.
Posted by Megan Crewe at 22:59 No comments:

Email ThisBlogThis!Share to TwitterShare to FacebookShare to Pinterest
Labels: lichen 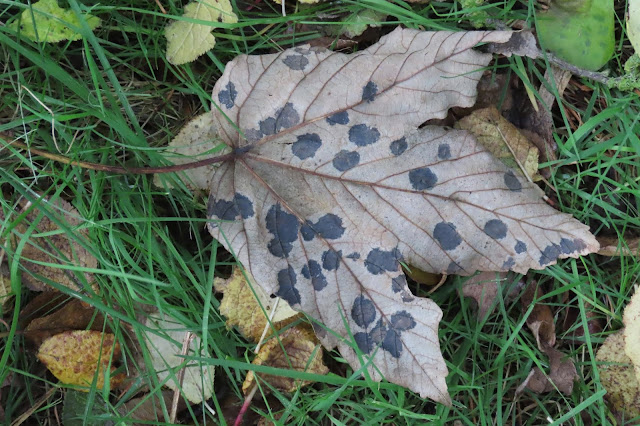 Now that we've reached late autumn, many of the leaves on our trees have dropped off and are scattered across the lawns. This makes the distinctive "tar spots" of Rhytisma acerinum a whole lot easier to spot. The fungus is common on maples and sycamores across Europe; a very similar and closely-related species occurs in North America. Fortunately for the infected trees, the fungus is a cosmetic problem which impacts only the leaves and seldom harms the tree itself. Next spring, when the weather warms up again, sticky spores released from these "tar spots" will travel on the wind and infect new leaves. While it doesn't generally harm trees or humans, the fungus isn't entirely benign. It has been associated with "equine atypical myopathy" and can cause death in horses if they consume too many infected leaves.
Posted by Megan Crewe at 22:39 No comments:

Email ThisBlogThis!Share to TwitterShare to FacebookShare to Pinterest
Labels: fungus 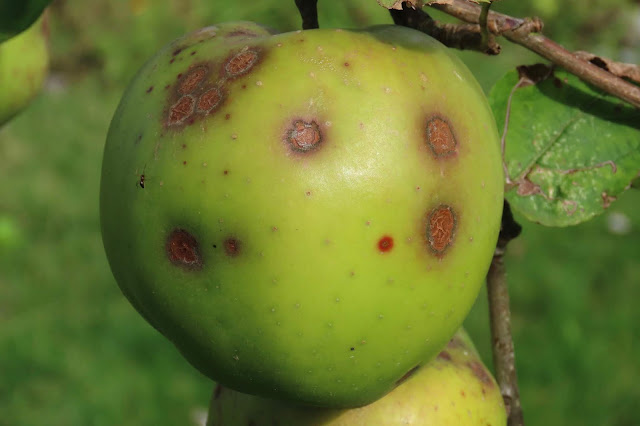 Among the trees in the garden are an ornamental crab apple (a hybrid cultivar called John Downie) and a regular apple. The latter is a small tree, gnarled and twisted by exposure to the strong, salty winds that regularly blast in off the North Sea, its branches flung southeastwards like arms thrown leewards in despair. For such a small tree, it yearly bears a bountiful harvest of huge apples — all blighted by the rusty brown splotches of Apple Scab (Venturia inaequalis). This is a very common fungal disease of crab apples, and it often spreads to other nearby members of the rose family. (Both apples and crab apples are members of that family.) Unfortunately, we have plenty of rose family species in the garden that might be affected: cotoneasters, hawthorns, and whitebeams among them.

Apple Scab is a worldwide problem now, transported around the globe by trade in apples and ornamental crab apples. It is a serious issue for commercial apple growers, but — other than a bit of unsightliness — isn't really a problem in gardens like ours. The infection rarely kills the tree, though it does pepper the leaves and fruits with blistered brown spots. Treatment typically includes spraying fungicides and clearing the infected fruits and leaves off the ground under the trees, and we'd rather have the many lichens and insects that would be impacted if we were to do so!
Posted by Megan Crewe at 09:58 No comments:

Email ThisBlogThis!Share to TwitterShare to FacebookShare to Pinterest
Labels: fungus 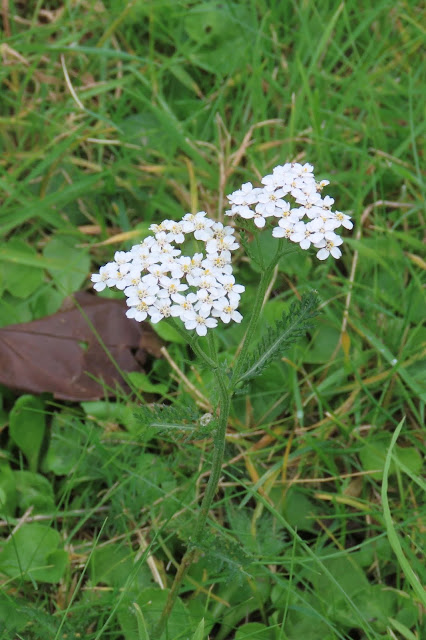 A vast majority of the plants in the garden have died back (or at least stopped flowering) now that we've reached late autumn, but a few have carried on blooming. Common Yarrow (Achillea millefolium) is one of them, its snowy white flowers still sprinkled across the lawn in places where the lawn mower hasn't reached, or where they've re-grown since the mower passed. The narrow feathery leaves and small, white blooms of these perennials started popping up in May, so some of them have had quite a long growing season.

Common Yarrow is abundant in the UK and native across Eurasia, from the British Isles to China. It has also been introduced to North America and Australia. It's the host for the rare parasitic plant Purple Broomrape, an important larval food plant for a host of moth species, and its pollen and nectar attract a variety of beetles, wasps and true bugs, so we're happy to have the plant around. It's quite aromatic, and European Starlings use it to line their nests; studies have shown that it inhibits the growth of nest parasites. The plant has also long been used by humans. Its genus name, Achillea, is a nod to the Greek hero Achilles, who reputedly carried Common Yarrow into battle to treat wounds; it was used as an astringent and tonic, and helped to staunch the flow of blood from injuries — hence some of its other folk names, including soldier's woundwort, staunchweed, and nosebleed plant.
Posted by Megan Crewe at 09:17 No comments: